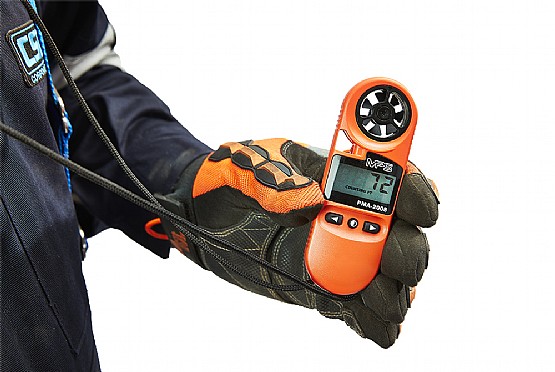 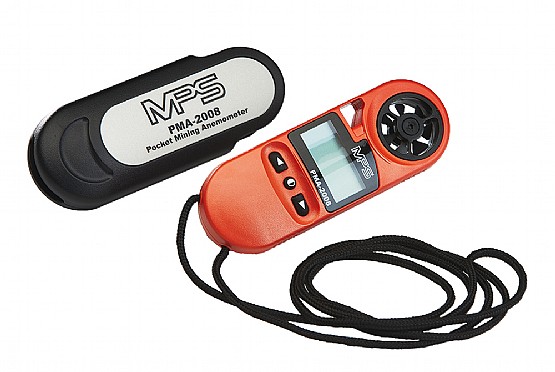 The PMA-2008 is a digital and intrinsically safe anemometer perfect for taking quick ventilation readings underground.  It is battery powered and small enough to fit in a shirt pocket, making it extremely convenient to carry and use.  It comes with its own carrying case, and is constructed to be dustproof, waterproof, and drop resistant.
Request a Quote

Rubber-covered push buttons on the PMA-2008 allow you to switch between two modes, and start and stop readings. An instantaneous, feet-per-minute readout can be selected, or a timed 60-second count of feet-of-air. The PMA-2008 Anemometer can also be user programmed to read in metric.

The PMA-2008 includes a 60-second count of feet-of-air. Simply walk the PMA-2008 across the entry and it automatically stops counting feet-of-air after 60 seconds. The count can be stopped for a partial reading. An audible alarm informs you when the count starts, stops and at 15-second intervals.

With the PMA-2008 in the instantaneous feet-per-minute mode, you can check air speeds behind line curtains, on longwall faces, over conveyor belts, anywhere you need to verify airflow.

The PMA-2008 will hold up in the mining environment. The unit can be submerged in water and, if dropped into a puddle or sump, will float.

There are no adjustments or calibration required with the PMA-2008. Accuracy of the readings is dependent on a user replaceable impeller. After approximately 6 months of use, the impeller assembly is slid out of the PMA-2008 housing and a new one is inserted in seconds. This assures precise readings with the PMA-2008.

Every PMA-2008 Pocket Anemometer comes with its own storage case and braided lanyard.

END_OF_DOCUMENT_TOKEN_TO_BE_REPLACED

Interested in obtaining a quote or learning more about MPS Anemometers?